哈工大报讯（陈明浩/文）7月18日上午9时，爱思唯尔科技论文培训将在诚意楼A12召开。《信息科学》杂志主编(Editor-in-Chief of Information Sciences)帕得里兹教授（PEDRYCZ）就如何撰写高水平论文、如何向国际期刊投稿等方面进行培训。本次学术讲座由数学系、研究生院、爱思唯尔公司共同举办，旨在帮助科研工作者提高科技论文写作水平，增加文章录用率。
《信息科学》杂志主编帕得里兹简介：     Dr. Witold PEDRYCZ     Editor-in-Chief of Information Sciences     Witold Pedrycz  received the M.Sc., and Ph.D., D.Sci. all from the Silesian University of Technology, Gliwice, Poland. He is a Professor and Canada Research Chair (CRC) in Computational Intelligence in the Department of Electrical and Computer Engineering, University of Alberta, Edmonton, Canada. Dr. Pedrycz is an IEEE Fellow, IFSA Fellow and a Fellow of the Engineering Institute of Canada (EIC).     His main research interests encompass fundamentals of Computational Intelligence,  Granular Computing, fuzzy modeling, knowledge discovery and data mining, fuzzy control including fuzzy controllers, pattern recognition, knowledge-based neural networks, relational computing, and Software Engineering. He has published vigorously in these areas. He is an author of 11 research monographs and over 250 journal papers published in highly reputable journals. His research is highly cited and he is also on the list Highly cited researcher on ISI HighlyCited.comSM     Witold Pedrycz has been a member of numerous program committees of IEEE conferences in the area of Computational Intelligence, Granular Computing, fuzzy sets and neurocomputing. He was a Program Chair of the 2007 Int. Conf on Machine Learning and Cybernetics, August 19-22, 2007, Hong Kong. He was also a General Chair of NAFIPS 2004, June 24-26, 2004, Banff, Alberta- a flagship conference of the NAFIPS Society.     He currently serves as an Associate Editor of IEEE Transactions on Fuzzy Systems. He is also on editorial boards of over 10 international journals. Dr Pedrycz is also an Editor-in-Chief of Information Sciences and IEEE Transactions on Systems, Man, and Cybernetics part A.       Dr. Pedrycz is the past president of IFSA and the past president of NAFIPS. Dr. Pedrycz is a recipient of the prestigious Norbert Wiener Award which is one of the two highest awards of the IEEE Systems, Man, and Cybernetics Society. He is also a recipient of the K.S. Fu of NAFIPS. and a 2008 IEEE Canada Silver Medal in Computer Engineering 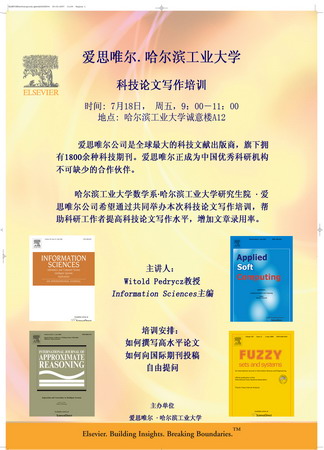